63mins, all ages
Can be played anywhere
English or Estonian

The word genius is often misused. In this case you might just actually be right. Coming from a sports background he took to music at a late age after a relatively serious incident left him without competitive edge.

The show will be a rollercoaster ride of the good and bad experiences Tate has had to endure on his colourful journey to become a musician. You’ll hear stories from his musical travels on the Trans Siberian, in the busy malls of Vienna and in the tunnels of Tallinn.

Art critics have said he has the face for radio and a voice that would suit silent cinema. 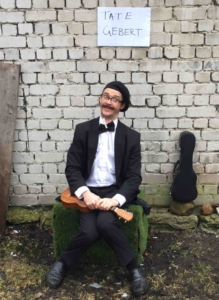